by The Editorial Team
in Emissions, Green, Others, Ports 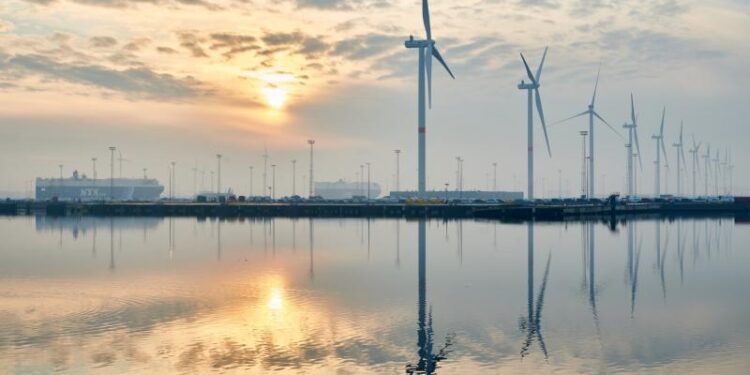 After 18 months of work, the largest industrial onshore wind farm in Flanders, with 11 new wind turbines, is now operational at the Port of Zeebrugge and will be able to create ‘shore power’ or so-called ‘cold ironing’.

Resulting from cooperation between ENGIE, Port of Zeebrugge, and International Car Operators, the 11 new turbines account for 44 MW of renewable energy delivered directly to ICO, an important hub for roll-on/roll-off cargo with worldwide destinations.

The wind turbines provide a total of 110 GWh of renewable energy per year, which corresponds to the consumption of about 30,000 families, and keeps about 50,000 tons of CO₂ out of the air each year, the port said.

This local energy production is used, among other things, for 308 electric charging points that were also installed by ENGIE in 2019. The electric charging island, with a total capacity of 3.4 MW, can charge more than 20,000 electric vehicles per week with green electricity.

In the future, the 11 wind turbines will also be able to create ‘shore power’ or so-called ‘cold ironing’ for ships to turn off their engines in the port, which is environmentally sustainable and prevents noise.

Ships mooring at the Port of Zeebrugge in the near future would therefore be supplied directly with local wind energy while they are stationary at the quay. This project strengthens Zeebrugge’s position as a Clean Port and energy transition hub in Europe,

At the ICO terminal, there is also room for storage batteries that can store part of the local renewable energy capacity, and thus account for the intermittent nature of the wind turbines. ENGIE is currently analysing the possible solutions for this.

The partners are currently exploring additional sustainable initiatives in the Port of Zeebrugge.

Port of Zeebrugge is actively working on the development of a Clean Port. In the context of sustainability and energy transition, we are ambitious for future projects. The size of ICO Windpark is therefore an important element in making operations in and around the port more sustainable,