by The Editorial Team
in Arctic, Pollution 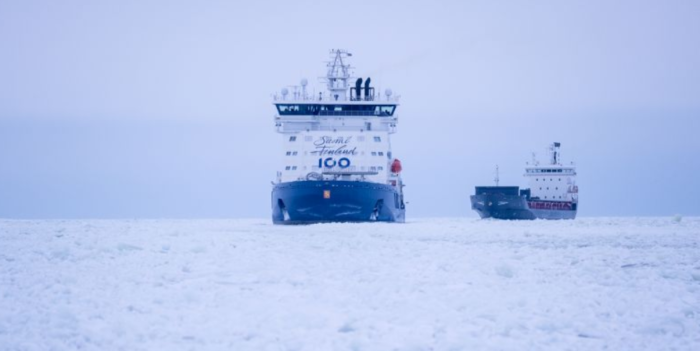 IB Polaris, a Finnish icebreaker has conducted an oil spill response exercise in the Baltic sea in order to test a new oil recovery system. This in-built oil recovery system enables Polaris to collect 1015 m³ oil with a rate of 200 m³/h in harsh weather and ice conditions.

Off the coast of Helsinki on 27 September 2018, the icebreaker performed  for the first time a mission with ultimate goal to test the new equipment and train sailors in the rapid deployment of oil containment booms. The highly automated system works with hatches that open on each side of the vessel from which inflatable barriers are deployed. By setting the vessel’s position in the path of an oil spill, these booms can trap pollutants, pushing them into hull of the ship. A skimmer with brushes then separates seawater from the oil which is stored in large tanks. Polaris’ ice breaking capabilities means the vessel can intervene in oil spills in ice infested waters.

Oil is thicker in cold temperatures but this does not stop Polaris to minimise oil spills. The oil recovery system has a heating mechanism that enables the system to pump oil with very high viscosity according to Lars Snellman a project manager from Lamor Corporation.

Maritime traffic in the Gulf of Finland is among the densest in Europe. Russian oil flows westwards, while container and passenger traffic sails between Helsinki and Tallinn. The ship’s operator, Arctia Ltd is a Finnish government-owned enterprise. It hopes Baltic expertise in both ice breaking and oil spill response will inform and educate decisions made much further north.

Shipping in the Arctic is increasing for many reasons. Tourism is one, but there is also trade and there’s great interest in the untapped deposits of minerals and fossil fuels. The increase of the traffic add to the potential for oil spills from platforms and vessels operating in remote locations.

Moreover, cargo shipping in Russia’s Northern Sea Route has increased about five times since 2013. In fact, a total of 13 million tons of cargo has been transported through the route until October 1.

Nonetheless, the Arctic Ocean remains a dangerous route. Vessels that attempt to travel through the Arctic ocean face high risks of running aground and while thick ice may be retreating, ice flows still present a serious threat to shipping.

More on the IB Polaris exercise can be found in this extended feature by The Associated Press: